Seasons After Fall Launches May 16 on PS4 and Xbox One

AAAAHHHHH ITS A GAME ABOUT A FOX. ok, extreme excitement aside (what the heck did you expect someone named Fionna Fox wouldn’t be obsessed with foxes?) Swing Swing Submarine’s hand-drawn puzzle-adventure game Seasons After Fall enchanted players and critics on PC, and is now pouncing its way onto consoles May 16. Dive into a captivating universe and explore a land governed by magic and nature. As a wild fox, you are sent on a perilous journey aided only by your ability to change the seasons at will, manipulating the gorgeous world while backed by an enchanting live string quartet.

Dance with elements as you dynamically switch between the seasons. Winter can freeze waterfalls, the spring rain raises water levels, and summer causes plants to grow and extend, offering a fresh aesthetic and unique ways to explore the forest and uncover the truth about the Guardians.

Each season drastically alters the environment: It is up to you to change the world and open new paths. The world of Seasons After Fall is overflowing with secrets―can you discover them all?

This is one of those games that a ton of people will overlook. It has very little action, light puzzling, and really is a game all about the story. Its a fun easy platformer, with beautiful music, fun elements, and a whole lot of very pretty art. The whole game is hand drawn and animated (something I have not seen sin Jotun). Anyone who loves animation, story or beautiful art owes to themselves to pick up this game. 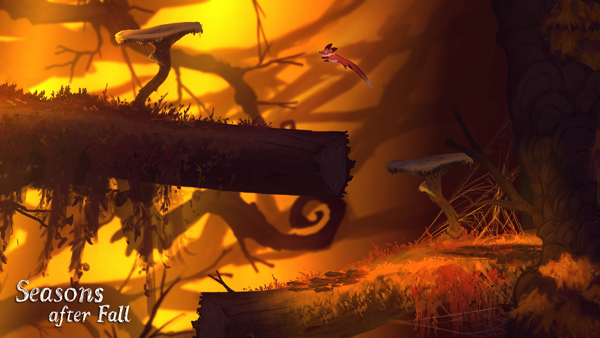 About Seasons After Fall
In Seasons after Fall from Swing Swing Submarine, you are a wild fox embarked upon a perilous adventure, with mystical powers that allow you to manipulate the life of the forest through dynamically changing the seasons; powers that open new pathways and opportunities throughout the game-world depending on the chosen season. Seasons After Fall encourages the player to explore a gorgeous 2D graphical world, accompanied by an enchanting soundtrack recorded with a live string quartet. Travel in search of the Four Guardians to reunite the scattered Seasons and restore order in the Forest. Summon Winter to freeze a waterfall to pass, or call for Spring to make plants and ﬂowers bloom, guiding you to previously inaccessible zones. Travel across forests, rivers and caves, and manipulate an ecosystem that is as uncanny as it is marvelous to unveil the secrets of this world.

Seasons after Fall releases for PlayStation 4 and Xbox One on May 16 2017.

Last of the crazies announced for Constructor 3